Before LabMD There Was JS&A

Before LabMD There Was JS&A

Joseph Sugarman is a beloved advertiser. He was a leader in mail order and direct marketing in the 1970s and 1980s. You may remember his ads for microelectronics and “BluBlocker” sunglasses. These were text-heavy ads, imbued with dreamy optimism of an improved life through gadgetry. They are a delight to read and Sugarman’s style is widely copied (One read: “This is the story of an incredible product. So incredible that we know of no future consumer product that will have such a far reaching technological impact on society.”) The closest contemporary example of Sugarman-style copy is the Skymall catalog.

In 1979, the FTC’s Chicago Regional Office investigated Sugarman’s JS&A Group, Inc. for potential violations of the mail order rule. Sugarman felt greatly mistreated by the FTC investigation and went on the offensive. He took out ads lambasting the FTC in the Washington Post, Wall Street Journal, and New York Times. 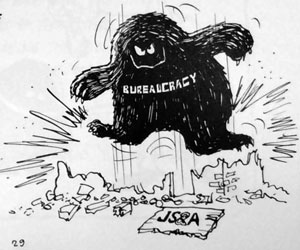 Dick Hafer wrote and designed “The Monster that Eats Business” to promote Sugarman’s cause.

Sugarman hired a graphic artist to write a 34-page comic book about the FTC’s abuses and JS&A’s plight. Titled, The Monster that Eats Business, it depicted the FTC has a giant, hairy monster that pursued JS&A without mercy. Sugarman aired his grievances, ones that might sound familiar in current LabMD case: the FTC had a vendetta against Sugarman, JS&A was a good business with many happy customers, there was no harm from JS&A’s rule violation, JS&A is more responsive to consumers than the FTC, there are worse companies out there than JS&A, the FTC abuses its investigative authorities, etc.

The comic book concluded with an appeal to the reader to send examples of FTC misbehavior to JS&A so that Sugarman could investigate them in an effort to reform the FTC.

Today’s LabMD and Wyndham controversies share aspects of the Sugarman dispute. Those frustrated with the FTC pinned their hopes to Sugarman’s cause. Sugarman was able to trigger Congressional oversight of the FTC, and in 1981, the Subcommittee on Oversight and Investigations of the House Committee on Energy and Commerce looked into the JS&A case. Sugarman also challenged the FTC in court, litigating his case to the 7th Circuit, but it upheld the agency’s authority to issue the mail order rule, to levy fines under it, and to impose an injunction against JS&A’s activities. 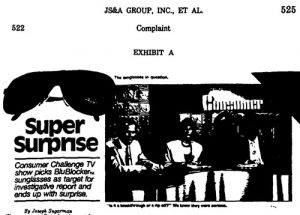 “Consumer Challenge TV” was an infomercial created by Sugarman to provide a review of BluBlocker glasses. It included this hilarious interlude: “We interrupt this program for a special announcement. This program is unable to handle the number of calls requesting the sunglasses featured in this program. If you are interested in obtaining the BluBlocker sunglasses, you may call the manufacturer directly at the number shown here.”

In 1989, the FTC had a second go at Sugarman, charging that he engaged in false advertising by creating a fake news show to promote “BluBlocker” sunglasses. He settled the case.[3]

Sugarman personalized his conflict with the FTC, and some argued that this distracted him from his business. Business strategy aside, personal crusades are unlikely to work on the legal front too. As much as businesses are frustrated with the FTC, their appeals do not resonate because consumers are frustrated by scams and security breaches. Federal judges are not impressed with personal campaigns either, and are likely to turn the screws on the respondent.